Okay so the backstory first for this post before we get all “I’m your venus, I’m your fire, your desire” on you. So Sweetness posted a pic on our IG story a few weeks ago taking an outdoor shower (nooo not a naked pic) but it was basically a pic of shampoo, a cute towel, and her razor. And that razor just so happened to be a Venus razor. So Sass replies to the story saying OMG we have the same razor, yada yada. And then we go back and forth for about 15 minutes about how great this damn razor is!

We know what you are thinking, every woman and their mom has a Venus razor so not really a coincidence. This is true butttt it was the exact same Venus razor, the pink Venus ComfortGlide White Tea Razor. And not only that, but we were literally chatting back and forth through IG about how great it is without even realizing that we were giving this razor so much friggin props. But what we’ve come to determine is that you need this razor and here’s why…

It glides. Like for real though. Venus has always had great razor blades but this one actually glides on your skin for a reallllllly close shave. It has moisture bars on the side that helps it move right along but this makes shaving so much easier and faster, you don’t even have to think! Well, we don’t recommend shaving without thinking, that could lead to injury.

Talking about gliding, you don’t even need soap! Literally just using water activates the moisture strips and it acts as a built in soap. It doesn’t suds up or anything but the moisture layer between the razor and your skin makes it silky silky smooth. Gone are the days of feeling like you have a razor blade scraping off layers of your skin and shaving in the sink just became much easier!

Probably our last favorite part is the flexibility of the razor head. Most Venus razors do this but this razor head bends and curves to your body in two different ways, which especially helps when getting into those hard to reach areas like our armpits and bikini line.

So there ya have it! We have much love for this razor and since we are besties, we just so happen to have the same exact one… because being besties would be the reason for that, right?!

What is your favorite razor? Tell us below! 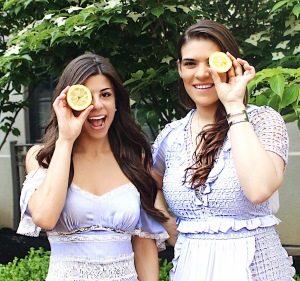